It seemed to be an isolated incident. We searched Facebook for the same Bible verse and found a seemingly endless wall of posts of similar images that had no labels covering them.

On November 16, 2022, Facebook user Lib Grimmett posted an image with words from a popular verse often shared by people of the Christian faith. “Stop and know that I am God“, read the Bible verse from the book of Psalms. Curiously, however, Grimmett’s post was posted with a label that read, “Sensitive content. This photo may show violent or graphic content.” The tag remained visible through November 21. 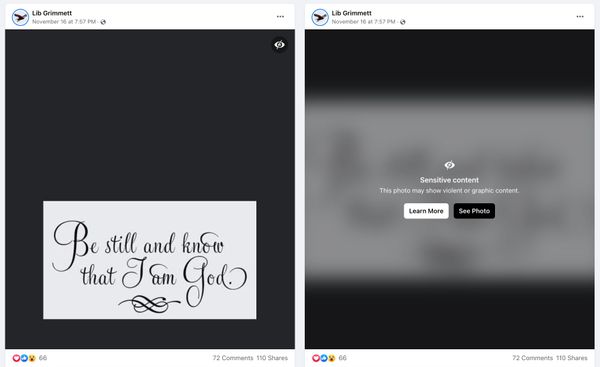 Another user also attempted to post the image, saying, “Facebook has censored this bible verse that says ‘Stay still and know that I am God.’ I’m seriously considering deleting my account and finding another way to stay in touch with you all.” 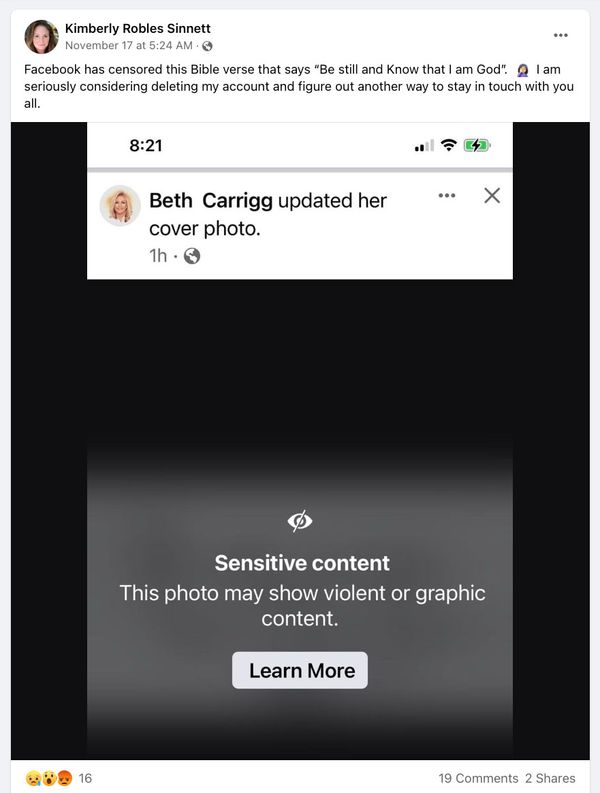 A “Learn More” button on the label added context from Facebook and Meta. 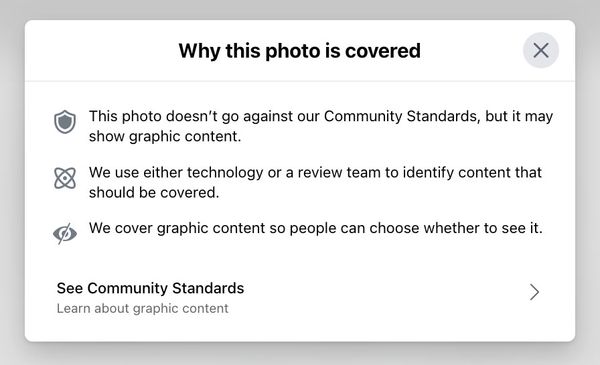 It read as follows:

This photo doesn’t violate our Community Standards, but it may show graphic content.

We use either technology or a review team to identify content that needs to be covered.

We cover graphical content so people can choose to see it or not.

The tag disappeared from posts shortly after we contacted Facebook via email. As of this writing, we have yet to receive a response.

It’s likely that the label was human error or simply a bad decision by the detection “technology” mentioned in the “Learn More” message. We note, for example, that a search on Facebook for the same Bible verse showed a massive wall of posts that had no similar “sensitive content” tag added.

We sometimes receive inquiries from readers asking if Facebook “censors” various types of posts, such as those with political or religious themes. In this case, the image showed a “sensitive content” tag, but again, that seemed like an anomaly compared to other posts of the same content.

In 2015, we reported a rumor that the social media platform had “censored” an image of Santa Claus kneeling in front of baby Jesus. A company spokesperson later told us the incident was a mistake. We also posted a fact check regarding a false claim that Facebook is banning Christian-themed content.