HOULTON, Maine – Matthew Smith, school principal at Greater Houlton Christian Academy, announced the honor rolls for the class of 2022. Silas Graham is this year’s class valedictorian, while Daniel Ross is the salutatorian and Alyssa Nightingale is the first honorary essayist.

Silas Graham is this year’s valedictorian, while Daniel Ross is the salutatorian and Alyssa Nightingale is the first honorary essayist.

Graham, the son of Montie and Sarah Graham of Cary Plantation, is a member of the National Honor Society and has won numerous academic awards and Presidential Education Awards. He has also received recognition from ACSI as an outstanding Christian student in the academic field.

Graham is employed at Hannaford. When he’s not working, he enjoys baseball and fishing. His university plans are currently undecided.

Ross, the son of Steven and Catherina Ross of Ludlow, is a member of the National Honor Society and the National Technical Honor Society. He is the recipient of the Maine Principal’s Award 2022. He has received numerous awards including Presidential awards and was chosen for the ACSI Distinguished Christian High School Student Award for Academics, Athletics and Fine Arts. 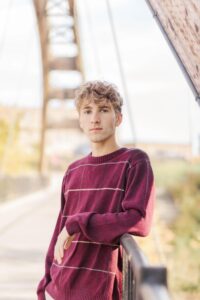 Ross is active in his community by volunteering at food and clothing drives. He also participates in college cross-country activities. In his spare time, Ross enjoys running, painting, drawing, sculpting and cooking.

He is currently employed at Walmart and WHOU. He will attend LeTourneau University in Texas, where he will pursue a degree in mechanical engineering.

Nightingale, the daughter of Matthew and Heidi Nightingale of Houlton, received numerous academic awards throughout her high school career; Christian Service Awards and was recognized by ACSI as an Outstanding Christian High School Student. She is also a member of the National Honor Society.

Athletically, Nightingale competed in five years of volleyball; two years of golf; and a year of softball. She is a two-year recipient of the PVC Academic Award in Golf and also received the 2022 Aroostook League Scholar Athlete honor.

Nightingale is actively involved in service at East Hodgdon Bible Church. In her spare time, she enjoys spending time with her family, waterskiing, wakeboarding, tubing and swimming at the lake and helping out at Nightingale Farms.

She also loves downhill skiing and enjoyed her job as a ski instructor at Big Rock Mountain this past ski season. Nightingale currently works at Houlton Farms Dairy. In the fall, she will attend Husson University, majoring in commerce.