Diaconal ordination for 20 men, the second of the year, held at Rogers Church 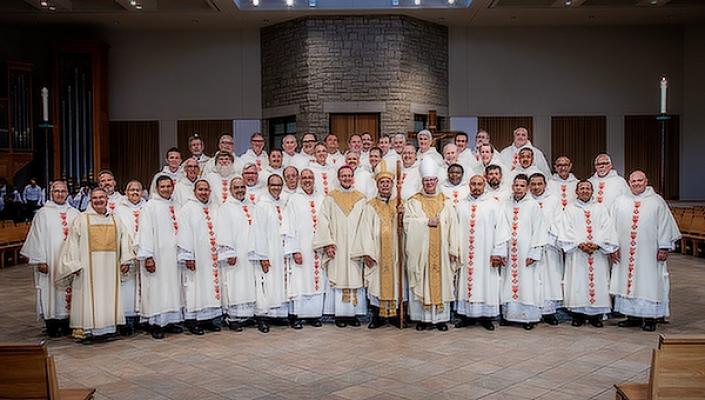 Bishop Taylor stands with the 20 men who were ordained deacons June 25 at St. Vincent de Paul Church in Rogers. An earlier Ordination Mass was held on June 11 in Little Rock, making it the largest class of deacons ever held for the Diocese of Little Rock.

Bishop Taylor stands with the 20 men who were ordained deacons June 25 at St. Vincent de Paul Church in Rogers. An earlier Ordination Mass was held on June 11 in Little Rock, making it the largest class of deacons ever held for the Diocese of Little Rock.

The largest diaconate class to be discerned in the diocese concluded its six-year journey with an ordination Mass on June 25.

A group of 20 men celebrated both the bonds of two groups of brothers and the resilience of men from all walks of life responding to God‘s call in their lives. The second diaconal ordination, following the first held June 11 in Little Rock, was significant for several reasons. It was the largest class in the diocese with 46 men, but it was the first class with two brothers ordained deacons and another group of brothers sharing their commitment to the Church as deacon and soon to be bishop.

In front of more than 900 parishioners, friends and family from St. Vincent de Paul Parish in Rogers, the men from northwest Arkansas and the River Valley took their vows to Bishop Anthony B. Taylor then that he laid his hands on each one of them. .

One of the new deacons is Jason Pohlmeier, 39, brother of Bishop-elect Erik Pohlmeier. Present on the altar were his brother, who will be ordained bishop of the diocese of St. Augustine, Florida, on July 22, but also his two eldest children, Isaac and Claire, who served as altar servers. The presence of the brothers’ father, Tom Pohlmeier, who will celebrate his 20th anniversary as a deacon at the Saint-Joseph church in Paris, only added to the family significance of the event.

Bishop Taylor told the men that ordination sets them apart for special tasks, but that God also equips them with what they need to serve and that by “the grace of God he will give you everything you have needed to accomplish it”.

Pohlmeier, principal of St. Joseph’s School in Fayetteville, said his journey to ordination coinciding with his brother’s ordination as a bishop “was a truly remarkable time for his family.”

Not surprised that his brother was interested in pursuing the diaconate, Bishop-elect Pohlmeier said he felt his brother’s chosen profession pointed towards vocation ministry.

“I could see where Jason encountered God in his life through the half-page papers he submitted each month,” said Bishop-elect Pohlmeier, whose last ministry for the diocese was that of director of formation for this diaconate class. “Sharing his journey and that of others was like a mirror in my own ministry. Without knowing it, I was preparing for another step in my own journey, and it helped me in my training to take another step in God’s plan.

Bishop-elect Pohlmeier said he felt all candidates were committed to the goals of increasing the intellectual, pastoral and human pillars in their formation.

“Each of them had an openness and a willingness to train, and I am very confident that they will bear fruit in their ministry,” he added.

Dan and Larry Grelle, two brothers from St. Vincent de Paul Church who entered the diaconate process together, said the trip deepened their life of faith and fellowship.

Larry, Dan’s younger brother by 13 months, said many of their spiritual conversations took place while mountain biking, which relieved some of the stress of often feeling overwhelmed by their professions and diaconate training. .

“We have come together not just as blood brothers, but as brothers in Christ, and I believe God has put us together on this journey to help strengthen our faith during training and to continue long after the training. ordination,” said Larry, who plans to serve under the marriage ministry with a new “surviving divorce ministry” at St. Vincent de Paul.

Dan, who feels called to care for those who have experienced loss with grief ministry, also sees the time spent with his “best friend” and brother as a time when they have “come together again” so they can sharing spiritual insights with someone going through the same process.

Eight parishes in northwest Arkansas and the River Valley featured men to be ordained:

The first deacon to be ordained in his rural mission parish in Yellville, George Gussy, said the trip was wonderful, but “both long and short.” Gussey admitted he didn’t answer the call the first time around but is grateful for his “yes” this second time around.

He said Bishop-elect Pohlmeier’s best advice was to “not think about the end, but enjoy the journey and do it day by day.”

By far, one of the toughest journeys of any deacon candidate was the one Arturo Hernandez, 52, of Rogers, experienced during his six-year journey to ordination. Hernandez was understandably emotional as he recounted the struggles and challenges he faced during this time.

Four years into his training, Hernandez’s liver began to fail, and as a result, the pancreas, kidneys, and lungs also began to shut down. Only his heart continued to beat strongly. Doctors told Hernandez he had seven days to live and he was advised to say goodbye to his loved ones as he was sent to the University of Arkansas for Medical Sciences in Little Rock to to be cured.

Through the power of prayer, a liver was located in three days. Although her doctor doubted the success, the transplant was performed on June 4, 2021. Her family in Mexico even made the trip to Arkansas to prepare for her funeral.

Through it all, Hernandez said he was not afraid but had peace. He was placed in a wheelchair after the operation, unable to walk or move his legs. Within two weeks, through prayer and physical therapy, he was walking and returning to his work as a welder.

Hernandez admits he’s been through so much, but said he thinks everyone is struggling to be here at the ordination.

“I didn’t see it as a problem, but I saw it as the Lord showing his mercy. He wanted to let us know that he is alive and that the Holy Spirit is coming for us,” Hernandez said.

In his remarks to the class, Bishop Anthony B. Taylor echoed those same feelings of hope by calling the newly ordained “agents of renewal” and challenging them to be “in the world, but not of the world.” “. Bishop Taylor told the men that ordination sets them apart for special tasks, but that God also equips them with what they need to serve and that by “the grace of God he will give you everything you have needed to accomplish it”.

Rob Brothers, 68, of Rogers, admitted there was a sense of relief that formal studies were over, but there was excitement to begin this new form of Christian and loving service to people of his parish.

“I believe the diaconate is an important ministry,” he said. “As a deacon, I will really have one foot firmly planted in both ministry and laity. I will be an ordained minister, but I have lived and worked among the people of my parish as a husband, father, and someone who had to work to support my family by living in the world.

Another important participant who was an integral part of the men’s six-year journeys was their wives.

Like many newly ordained, Brothers credited his wife, Becky, with providing support and encouragement during the process.

“Even though we have had lives of good faith separately, the process of discernment has led us to grow in our life of faith and prayer together, not just as individuals. I believe that our faith in God and each other has grown tremendously over the past few years, and our already good marriage has grown much stronger,” he added.

Becky agreed that the program helped enrich their love for each other.

“I believe the best part is the spiritual growth I have seen in both Rob and I. We see and understand each other more, we are patient with each other and our love for each other has increased as we get closer to the Lord,” she said.